CCIC has set an ambitious plan to pursue a “tech driven” growth strategy in the coming digital era. Replacing a Java based enterprise core system that has been powering its last 15 years of rapid growth with a cloud native, microservices based digital platform is a key condition to push this strategy. It is to enable CCIC to transform its business into truly customer centric, ecosystem oriented, and fully online.

Decision to fully replace its Java core was made in July 2016 and after a systematic vendor selection, eBaoTech was awarded and implementation was formally kicked off in May 2017. The first launch of two pilot regional branches was made in December 2018, followed by another batch in May 2019, and the final rollout nationwide was successfully completed in July 2019. In its real and massive production operations, the new platform has been running smoothly and delivering its differentiating business values in all key dimensions. CCIC and eBaoTech jointly achieved a historical milestone: globally the first large scale and full line of business general insurer to run its entire businesses on a cloud native and microservices based core platform.

eBaoTech was awarded the project by CCIC mainly because the maturity and richness of eBaoCloud InsureMO or insurance middle office, which is positioned as global insurance industry middleware, and contains all basic elements of insurance capabilities in the form of microservices. All application functions and business platforms are developed by API calls to InsureMO. All CCIC’s internal staff user interfaces and workflows, as well as CCIC’s powerful Open API platform for massive ecosystem connectivity are developed by calling a comprehensive set of APIs from eBaoCloud InsureMO. This is an entirely new approach to develop core insurance systems and as a result, insurance innovations would be faster, cheaper, and more tailored made without reinventing the wheels of basic insurance APIs. 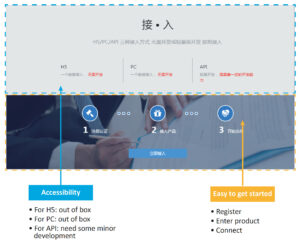 Some key facts below:

Globally, CCIC is the first large scale insurance company with all mainstream lines of insurance business, to run entirely on a core platform based on distributed, cloud-native and microservices middleware platform.

CCIC has won multiple industry awards in China and outside China, including the 2018 Asia Insurance Technology Awards (AITA) run by Celent and Asia Insurance Review. CCIC was recognized as the winner of “Legacy and Ecosystem Transformation” category with its adoption of the future-proof 4G (microservice and cloud-native architecture) insurance technology. 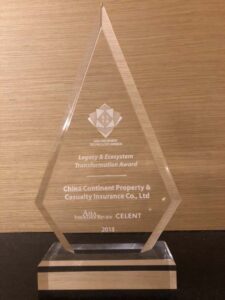 China Continent Insurance Co., Ltd. is a national property and casualty insurer established with the approval of the State Council and China Insurance Regulatory Commission. It is also the only direct P&C insurance company under China Re Group. China Continent Insurance was established on October 15th, 2003 based in Shanghai, with registered capital of USD 2.2 billion. In 2018, the company achieved annual premium income of USD 6.2 billion, ranking the fifth in China.

China Continent Insurance achieved leaps forward in development in the sixteen years since its foundation, with a nationwide network of 35 provincial branches, one special sales unit, one shipping insurance operation center, one e-commerce company, and over 2,000 outlets at provincial, municipal, and county levels. From 2014 to 2018, the company was continuously rated by A.M. Best and received an “A” in both financial strength rating (FSR) and issuer credit rating (ICR) with stable outlooks. More information at http://www.ccic-net.com.cn/

This website stores cookies on your computer. These cookies are used to collect information about how you interact with our website and allow us to remember you. We use this information in order to improve and customize your browsing experience and for analytics and metrics about our visitors both on this website and other media. To find out more about the cookies we use, see our Privacy Policy. If you decline, your information won’t be tracked when you visit this website. A single cookie will be used in your browser to remember your preference not to be tracked.
Cookie SettingsAccept AllDecline
Manage consent

This website uses cookies to improve your experience while you navigate through the website. Out of these, the cookies that are categorized as necessary are stored on your browser as they are essential for the working of basic functionalities of the website. We also use third-party cookies that help us analyze and understand how you use this website. These cookies will be stored in your browser only with your consent. You also have the option to opt-out of these cookies. But opting out of some of these cookies may affect your browsing experience.
Necessary Always Enabled
Necessary cookies are absolutely essential for the website to function properly. These cookies ensure basic functionalities and security features of the website, anonymously.
Functional
Functional cookies help to perform certain functionalities like sharing the content of the website on social media platforms, collect feedbacks, and other third-party features.
Performance
Performance cookies are used to understand and analyze the key performance indexes of the website which helps in delivering a better user experience for the visitors.
Analytics
Analytical cookies are used to understand how visitors interact with the website. These cookies help provide information on metrics the number of visitors, bounce rate, traffic source, etc.
Advertisement
Advertisement cookies are used to provide visitors with relevant ads and marketing campaigns. These cookies track visitors across websites and collect information to provide customized ads.
Others
Other uncategorized cookies are those that are being analyzed and have not been classified into a category as yet.
SAVE & ACCEPT